The Components of Teaching

Representative of one’s accumulated professional knowledge the components of teaching are individual concepts that are essential and foundational in all teaching and learning experiences.

A Federally funded 501-C grant in the 70s and 80s provided the backdrop for eight years of Spectrum classroom research. The training program involved 4 phases, the phase we will focus on will be teacher classroom implementation of the different styles.

During the classroom observations we observed some teachers had more difficulty than others implementing new teaching approaches. During the private feedback visits, the conversation focused mostly on general topics and skills critical for the implementation of any T-L interaction rather than the structure or characteristics of the teaching style in focus. These follow-up visits were perplexing until we realized that many teachers did not have a broad understanding of the individual concepts that are fundamental in all teaching and learning experiences.

These individual concepts that are essential and foundational in all teaching and learning experiences we refer to as the components of teaching (COT). Teachers who had a strong foundation in the COT were more apt to be successful when implementing new teaching styles. Why? Implementing a variety of significantly different teaching approaches requires teachers to make changes in their pedagogical patterns. They must make cognitive, social, emotional, physical, even ethical changes when structuring individual lessons that seek different T-L objectives. Implementing new approaches was more difficult for teachers who had only a minimal knowledge base in the different components.

The components are independent of any particular T-L style; yet they are essential to all teaching lessons. There are 12 components of teaching.  These 12 components are always present whether we are aware of them or not; they are irreducible. They represent basic entry level essential content that is manipulated, in varying configurations, to support the intent of the anticipated teaching approach. The value of the components does not diminish with time; rather the COT become each teacher’s professional library representing the accumulated knowledge acquired and relied on for teaching.

Each component is essential and fundamental to every teaching event and each has its separate extensive knowledge base that details its content, complexities and consequences.  Based on the teacher’s knowledge, these separate entities will merge to construct the learning expectations.  Each teaching style triggers only a portion of the known information about each component.

Only two of the twelve COT are introduced here: feedback and cognition. These two components are selected because they are profoundly critical in the developmental process.

The following are topics that comprise the broadest view of feedback.  What we know determines what we implement.  Each is essential in varying different configurations to accomplishing the objectives of each teaching style.

How we define a component influences the way we implement the component. Teachers who define and understand feedback as “assessing content--telling learners how they are doing” will interact differently with students than teachers who define and understand that feedback serves to reinforce or change subject matter, behavior, or logistics and it plays a vital role in shaping one’s self-concept.  Our accumulated knowledge influences the way we interact.

The following chart is an overview of the basic content specific to feedback.  The COT represents only the entry level information all teachers need to know. 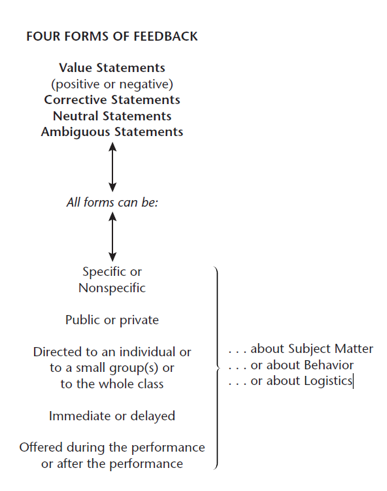 Because feedback is crucial in every facet of life it is imperative that learners develop a feedback repertoire that is not based on one criterion such as correct of incorrect content or purely emotional reactions.  Because each landmark style develops different attributes and skills on the Developmental Channels, learners need to acquire a diverse range of feedback options that can serve them in a variety of life situations.

Although each COT is critical, feedback and cognition receive special acknowledgement because all learning relies on cognition and our self-concept is profoundly shaped by feedback we receive in all situations. Each of these topics are covered in more detail in the downloadable book.

Cognition is a primary function relevant in all teaching events. In fact, cognition is critical to learning. Without the ability to think clearly learning is restricted.

We will approach this information first from an untangled point of entry.  We are focus on the basic cognitive principles that are necessary to deliberately trigger and develop thinking skills in teaching and learning.

There are 3 different thinking processes:

Although each process has a different content focus and behavior expectations, each follows A General Model for the Flow of Conscious Thinking.

This model delineates the four phases the mind follows when we consciously think. The flow follows the:

Stimulus = Thinking occurs when something triggers and engages the mind. The trigger is always a particular stimulus (S) that captures in varying degrees an individual’s attention.

Mediation = The need to know leads to a mediation (M) phase where a search for the cognitive operation(s) that will answer or resolve the dissonance.

Response = When the search, regardless of how long it takes, is completed, a response (R) is produced in a form of an answer, a solution.

This formulation looks simple; however, within each phase a series of variables can either enhance or hinder the flow of thinking. Knowing the structure and consequences of the Flow of Conscious Thinking offers teachers more awareness and opportunities for assessing the reasons for successes or deviations in learner’s performance.

Let’s look at the Mediation phase.

Without familiarity with the individual cognitive operations, it is difficult to deliberately think in multiple dimensions.

The developmental benefits and richness in both memory and discover thinking are linked to the number and variety of different cognitive operations.

The following charts detail a sampling of the various cognitive operations in different thinking processes.

Notice the chart did not identify multiple cognitive operations for Creativity.

This is because the creative process refers to responses that are perceived as unique or original—a product or response that is considered uniquely different or unexpected.  During our research, we observed that the word creative does not indicate a list of specific cognitive operations (like memory and discovery) rather we concluded that creative is a value word that bestows an attribution of uniqueness and originality (credit, acknowledgement) to a response.  Therefore, it may be said that the responses considered creative can be produced in any of the cognitive operations.  It is possible to produce a creative response in any of the memory or discovery cognitive operations.

Encouraging and acknowledging creativity —regardless of the cognitive operation or the magnitude of the thought—is critical for developing the talent and comfort to be creative.

Creativity alone – creativity as the singular cognitive focus for a society--for schools--will not lead to where a society wants to go.  The Versus approach to any complex issue will not solve the problem at hand but it will create new unforeseen problems.  Although the creative process can direct, can carve the future, it is the reproduction styles (Styles A-E) that build the future. Thinking that acknowledges the partnership among the three cognitive processes best serves individuals and a society.

Between the Inclusion Style-E and Guided Discovery Style-F an invisible cognitive threshold separates the memory styles from the discovery styles.

Previous Next Back to Top